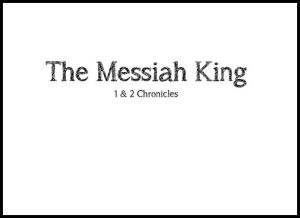 When we think of God in the Old Testament is easy to think of God an an angry god full of unjustified wrath and spite. In recent years in an attempt to give God good PR many Christians have tried to emphasize God’s faithfulness and love. But this is usually being done in a way that neglects the reality of God’s wrath.

Now when we neglect God’s wrath we diminish Gods holiness. In the same fashion when we neglect Gods wrath we also diminish Gods love. This is because wrath is the holy response of a holy God to sin. And, our understanding of God’s love means very little if it is not in the context of Him resolving the problem of how to reunite a holy God who must judge sin with a rebellious people.

The chapters leading up to 13 and 14 have been designed, by the writer of Chronicles, to show David as a type of the true Messiah-King. In 11-12 David was established as King of Israel. Not only did Israel as a nation acknowledge this new king, but more importantly David was the King whom God had ordained. Although David was a man after God’s own heart he was still a man. Therefore he had failures. His most well-known failure is when he committed adultery with Bathsheba and murdered Uriah. But the writer of Chronicles only makes an effort to record two of David’s failures. Neither of which include Bathsheba and Uriah. This should lead us to believe that the writer is attempting to convey what he sees as the most important of David’s failures. The second being found at the end of first Chronicles when David conducts a census of the people of Israel and the first being found here in chapter13 when David treats God in an unholy manner in the way that he moves the Ark of God.

The Wrath of God

Chapter 13 is an atypical example of God’s wrath. Rebellion against God in light of His holiness without a mediator will always result in God’s wrath being poured out on the rebellion. The events that led up to this outburst of wrath  started with David deciding to bring the Ark of God to Jerusalem, the new capital of Israel. As we will see in later chapters this was a good idea however, in verse 7 we are told that the Ark was being transported on a cart. This is a direct violation of the Law  which required the Levites to carry the Ark on their shoulders with poles sticking out of the side of the Ark.

Considering that carts during this time period were made with wooden wheels and the roads were dirt we can assume that transporting the Ark would have become unstable during transportation. In verses 9 through 10 we learn that Uzza reached out his hand to steady the Ark. Because he touched the Ark he was killed. This is exactly what happens when a sinful person comes in contact with the Holy God of Israel without a mediator. God, being holy, must pour out his wrath on man rebellion.

This should cause us to ask two questions. 1. What does it mean to be holy? And 2. if God must pour out his wrath on those who rebel, why was God’s wrath isolated to just Uzza?

Easily understood holy means to be set apart. Christians are made holy, we are set apart. But to use this definition in connection with God is insufficient. Because God is holy. He was holy before sin and will remain holy after sin. He can never become less holy, nor can he become more holy. He is holy. A simple illustration would be to think about water. We can consume water and gain more water. We can stop drinking water and lose water. But think about the Water. It can never become more or less watery. Water is always water. Never more or less.

Wayne Grudem defines God’s holiness as ‘the doctrine that God is separated from sin and devoted to seeking His own honor’.[1] We can become more or less holy. God cannot. Therefore he must destroy anything that is not separated from sin and seeking His honor. This destruction is more commonly known as wrath. God broke out in wrath against Uzza because Uzza was not separate from sin and seeking the honor of God. This of course leads us to the second question.

Why was God’s wrath isolated?

If God is so Holy and omnipresent (present everywhere at once) then why did God isolate his breaking out of wrath? In light of God being present everywhere we must read verse 6 and understand that Yahweh chose to enthrone Himself above His Ark where his Name was to be called. Yahweh is not a localized deity, but like the incarnation of Christ (where God became a man) Yahweh has often reserved his manifested presence in very localized ways.

God is present here and now but as an act of grace he is not pouring out His wrath. However with the Ark, God was present in a way in which he chose not to hold back his holiness and wrath. Think of a fireman’s hose. Although it is filled with water, the full force of the water will only be felt where the nozzle is being pointed. Like the fireman’s hose that contains water, you will only feel the full force of God’s presences where he chooses to aim. And it just so happens to be that God chose to aim his presence at His Ark.

Therefore, because he is a holy God he is required to pour out His wrath on a sinful and rebellious humanity. However, this should cause us to ask How Can a Sinful and Rebellious people live in the presence of the Holy God and not have his wrath poured out? The short answer is Love.

The long answer, after God’s holiness broke through against Uzza in verse 12 David became angry with God. So the Ark was placed in Obed-edom’s house for three months. Incidentally Yahweh blessed Obed-edom. Then in light of the organization of first Chronicles an odd sequence of events is placed in between Uzza’s death and the Ark triumphantly entering the into Jerusalem in chapter 15.

It seems the best way to interpret the events of chapter 14 in a way that does not lead us to separating the events of chapter 14  from the events of 13 and 15 where the Ark is being moved to Jerusalem. To be faithful to the writers intent we should study chapter 14 in light of the question raised by David in 13:13 where David asks, “How can I bring the Ark of God home to me?” Which is our same question, How Can a Sinful and Rebellious people live in the presence of the Holy God and not have his wrath poured out? Love.

The only thing that to stop the wrath of a Holy God from being poured on sinners is for God to love those sinners so much that he would be willing to pour out his wrath on his own Son. Since Christ was righteous  before God his righteousness has been applied to those who have joined themselves to him and are therefore free from being condemned by God.

This is expressed in 14:2 when David realizes that he had been established as king over God’s chosen people and highly exalted for the sake of God’s chosen people. David was a picture of Jesus, who is the true Messiah-King that the writer of Chronicles is pointing us to. It is when Jesus came in the form of a Man that he was established as the true Messiah-King when he was highly exalted on the cross and through His ascension to the right hand of God for the sake of the elect. Those who have chosen to align themselves with Christ by submitting to His saving kingship also benefit from Christ’s highly exalted position.

When considering Holiness, Wrath, & the Love of God the proper response will always be fear. But the final question we will ask is,

Will your fear of the true Messiah-King come from

having been redeemed by the Love of God,

or having been condemned by the Wrath of God?