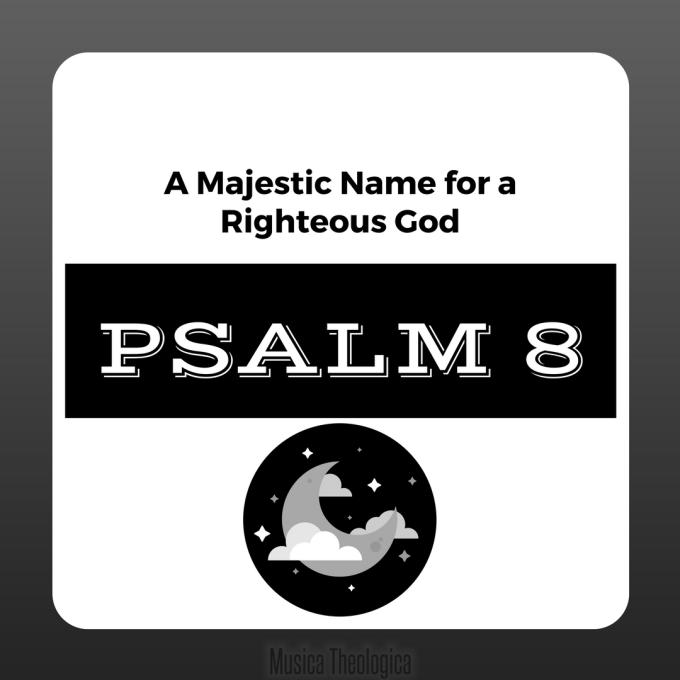 Psalm 8 – A Majestic Name for a righteous God

Out of the Mouths of Babes

Plead to Repent and Believe

To the choirmaster: according to The Gittith. A Psalm of David.

how majestic is your name in all the earth!

You have set your glory above the heavens.

Out of the mouth of babies and infants,

you have established strength because of your foes,

to still the enemy and the avenger.

When I look at your heavens, the work of your fingers,

the moon and the stars, which you have set in place,

what is man that you are mindful of him,

and the son of man that you care for him?

and crowned him with glory and honor.

You have given him dominion over the works of your hands;

you have put all things under his feet,

all sheep and oxen,

and also the beasts of the field,

the birds of the heavens, and the fish of the sea,

whatever passes along the paths of the seas.

A Theology of Creation

Genesis 1 announces that very first command that man (man and woman) receives from God. That command is to in effect to rule and subdue all of the creation on the earth. With the specific mention of the animals, fish, and birds. This command is found in the context of a God who is establishing the created order. We see this order in that light was created first, but the sun which rules over the sun was created later. With the pinnacle of the created order being man and woman who are to rule and subdue the entire creation. However, in our modern context of scientific exploration, we tend to forget that this first chapter is primarily about the creator, more so than the creation. It is as if we have seen a beautiful painting and have completely neglected the artist responsible for the painting. No one has ever complimented a painting for creating itself. Rather the praise goes to the artist. Neither has anyone given praise to the curator for the work of art. These examples are silly. But this type of misplaced complementing is a regular habit in the world of mankind. Too often we are busy praising creation, or even the curators of the creation yet we neglect to give praise to the deserving of the praise. The creator himself.

Romans 1 speaks of this when Paul writes, “they exchanged the truth about God for a lie and worshiped and served the creature rather than the Creator” (Romans 1:25)[2]. In a strange turn of events, the modern Christian has too often forgotten how to articulate the beauty that is to be seen in the created order. This stands in contrast with those who reject the Creator yet find beautiful ways to articulate the beauty of this created order. However, those beautiful articulations quickly become a horrifying form of false worship to the creation and the created caretakers.

Taking time to understand what the Bible says about creation and our role is significant to understanding Gods plans for his creation. Because if our view of the Creator and creation relationship is too low then we will begin to have skewed views in many other areas of our theological beliefs as well. For example, what did sin do to the created order? What did Christ’s death and burial and resurrection mean for the created order? What does it mean that all of the creation longs for Christ’s return (1 Corinthians)? We will not be addressing each of these questions specifically, but they should at least serve to prime our minds for a grander view of all creation than even the unbeliever can hold to.

When we read Psalm 8, we are reading a congregational song that takes us to the height of the Christian worship. The name of YHWH. When reading the English text, LORD, the Hebrew text reads YHWH. When we read in the English text, Lord, the Hebrew text reads Adonai, which means Lord or Master. This is the result of a long history of translating and Jewish tradition.[3] So when we see that the LORD’s name is majestic in all the earth or that his glory has been set above the heavens then we must read here that the name being spoken of here is YHWH. Observe the mention of both the heavens and the earth in this first verse. This is not accidental. David is drawing our minds back to creation with these words of Genesis 1:1 when we read that, “God created the heavens and the earth.”[4] The glory that is being spoken of here is his name.

Name Above All Names

Most translations begin this psalm with ‘LORD our Lord.’ To feel the full effect of this psalm requires that we differentiate between LORD and Lord. Whenever you are reading in the Old Testament the name ‘YHWH’ is translated as LORD. This is because by the time the Greek translation of the Hebrew Old Testament was beginning to be translated it was common to read the Hebrew word Adonai in place of YHWH. Adonai is the word we also translate as Lord. So when the Greek translation was being crafted it was common to read the Greek word Kurios (Lord) in place of both Adonai (Lord) and YHWH. So now our English translations commonly follow the same translating history. Here is a helpful chart showing the translating process.

The very mouths of inarticulate babies and infants have been loosed to speak strength (Matthew 21:16). Not because of the ability of the babies and the infants, but because of the desire of God to chose the foolish of this world to shame the wise of this world (1 Corinthians 1:26-31). In his presence, they will keep silent (1 Samuel 2:9). The still silence is not an option, it is a completed command (Psalm 40:10).

Without a clear theology of creation, this psalm loses much of its theological weight.

In Genesis 1:28-30 we learn that man (man and woman) is called to rule & subdue. In Genesis 2:7, 18-23 we see that man was made differently, received life from the breath of God, then was appointed to name every other created thing. At one time we were less but put above. We were the same as the creation (a creation of a creator) but made above the rest of the creation. We were insignificant but appointed as unique. We were low but lifted up.